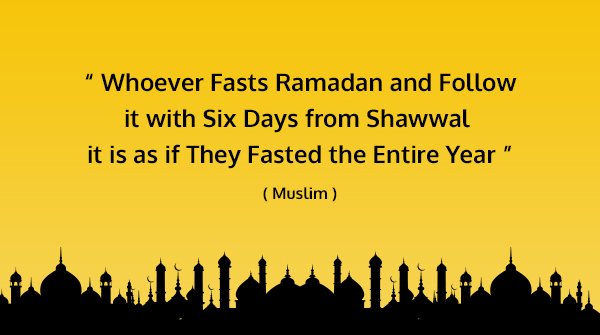 THE SIGNIFICANCE OF SHAWWAL

Shawwal is the tenth lunar month. During the period of ignorance, Ramadhan was regarded as a blessed and sacred month. Shawwal was regarded as a cursed month of ill-omen by the Pagan Arabs. People of that time never married during Shawwal. A`ishah رضی اللہ تعالیٰ عنہ expressed contempt at the people to consider this month to be inauspicious, as she was married to Rasulullah ﷺ in this very month. The wrong beliefs of the people were clearly disproved by A`ishah رضی اللہ تعالیٰ عنہ by her marriage to Rasulullah ﷺ in the month of Shawwal which was no obstruction to her elevated position and the great love Rasulullah ﷺ had for her.

To a Muslim the first day of the month of Shawwal, is of very great significance, as this is the day of Eid. On this significant day, Allah ﷻ showers His blessings and forgiveness on His servants who have fasted during the month of Ramadhan. It is related from Anas رضی اللہ تعالیٰ عنہ that Rasulullah ﷺ has said “When the day of Eid comes, Allah proudly asks in the presence of the Angels regarding his fasting servants “O My Angels, what reward is there for such labourers who have fully completed their duty”.The Angels reply “O Rabb they should be rewarded in full”. Then Allah ﷻ asks the Angels, “O My Angels, what is the reward for those male and female servants who have fulfilled My divine command which was compulsory upon them, and now they have come out to beseech Me in du`a? I take an oath upon My grandeur and glory, My generosity and exaltation of My elevated position, that I will definitely accept their du`as”. Thereafter Allah ﷻ says to the muslims “Disperse, I have forgiven you and replaced your sins with good deeds”. Rasulullah ﷺ says “they return forgiven”.

THE SIX NAFL FASTS OF SHAWWAL

Abu Ayyub رضی اللہ تعالیٰ عنہ relates that Rasulullah ﷺ has said: “Whosoever fasted the full month of Ramadhan and then follows it with six fasts of Shawwal, is like a person who has fasted the full year”

In another Hadith it is related that by observing these six fasts after Ramadhan all faults and sins are forgiven. The reward of every good deed is tenfold or more.

In a lengthy Hadith, Anas رضی اللہ تعالیٰ عنہ narrates that Rasulullah ﷺ has stated: “When Eid arrives, Allah ﷻ addresses the Mala’ikah and says ‘They (Muslims) have fulfilled My order. They have emerged to make du’a. I take oath by My Splendour, by My Grandeur, by My Grace and by My Loftiness that I will most certainly accept their prayer.” Allah ﷻ then proclaims to the Believers: “Return! I have forgiven you and I have exchanged your evil deeds with virtues. They thus return from the Musalla forgiven.”

May Allah ﷻ accept our efforts and make every moment of this blessed month a means of receiving His Mercy, Blessing and Forgiveness. May we all be granted a place in Jannah.